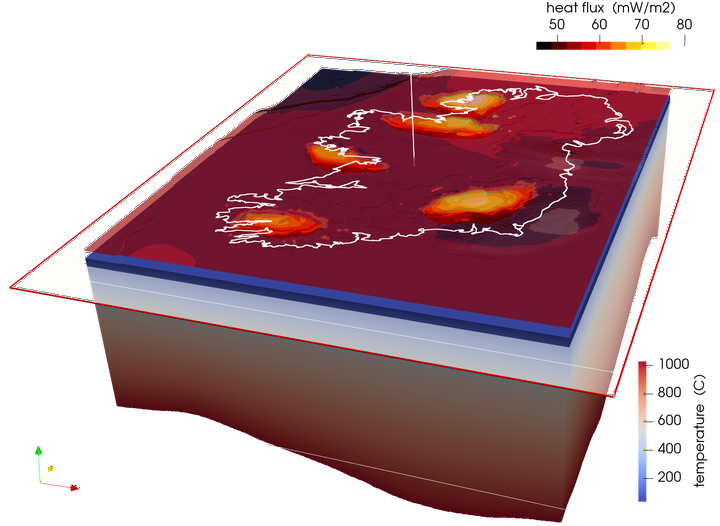 Thermochemical model of the lithosphere in Ireland

The aims of G.O.THERM.3D are to develop a robust and unique model of temperature within Ireland’s crust and to produce a 3D temperature atlas of the country. To those aims, existing geothermal data in Ireland will be compiled and jointly interpreted together with other geophysical, geological and petrological data using, and further developing, integrated geomodelling tools developed by our group in DIAS.

G.O.THERM.3D aims to make further thermal conductivity measurements, as some Irish rocks remain poorly sampled and thermal conductivity is a key parameter in the calculation of temperature at depth. The temperature model, and its associated data, will be made publicly available on an interactive online platform. A robust and detailed 3D temperature model will provide an insight into the thermal regime within Ireland’s subsurface, and will serve as a robust constraint on future quantitative modelling of both shallow and deep geothermal prospects across the country.

A project objective is that an interactive, publicly available 3D temperature model will increase public awareness of geothermal energy, will focus and encourage geothermal resource exploration and will assist in the development of public policy on geothermal energy exploration, mapping, planning and exploitation. 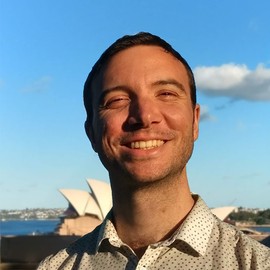 Adjoint inversion of the thermal structure of Southeastern Australia

An efficient inversion framework that gives improved estimates of the thermal state of the crust in Victoria using heat flow measurements and Curie depth in a joint inversion using 3D geological models, and numerical models of thermal diffusion. The outcome of this work is an estimation of the basal heat flux, thermal properties and the heat production rates for the various domains in the model together with uncertainty information.
ben mather, louis moresi, peter rayner
PDF Project DOI

PyCurious: A Python module for computing the Curie depth from the magnetic anomaly

PyCurious is a Python package for computing the depth to 580°C from maps of the Earth’s magnetic anomaly using a Bayesian …
ben mather, robert delhaye
PDF Code Project DOI 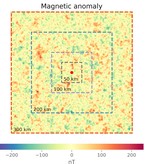 Constraining the geotherm beneath the British Isles from Bayesian inversion of Curie depth: Integrated modelling of magnetic, geothermal and seismic data

Regions where surface temperature has increased since past glaciation events, such as Ireland, underestimate the heat output of the …
ben mather, thomas farrell, javier fullea
Preprint Project DOI

G.O.THERM Project: an integrated approach to probe the deep thermal structure of Ireland 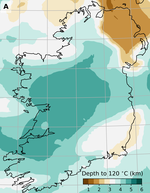 Temperature models for assessing geothermal potential are usually concerned with the upper 5 km of the crust. The configuration of …
Tuesday, 27 Feb 2018 12:00 AM Vienna, Austria
Project

Probing the geothermal potential of Ireland

Geothermal power is traditionally viable only in volcanically active regions, however direct application of this energy source for …
Tuesday, 27 Feb 2018 12:00 AM Cork, Ireland
Project

Surface heat flux is highly sensitive to small temperature fluctuations at varying timescales. The magnitude of these variations depend …
Tuesday, 27 Feb 2018 12:00 AM Hobart, Australia
Project

Estimating the depth to the Curie isotherm: a synthesis of the methodology and its application to Ireland.

Magnetic data is one of the most common geophysics datasets available on the surface of the Earth. At long wavelengths it pertains …
Monday, 12 Feb 2018 10:51 PM DIAS, Geophysics Section, 5 Merrion Square, Dublin 2, (library)
Project