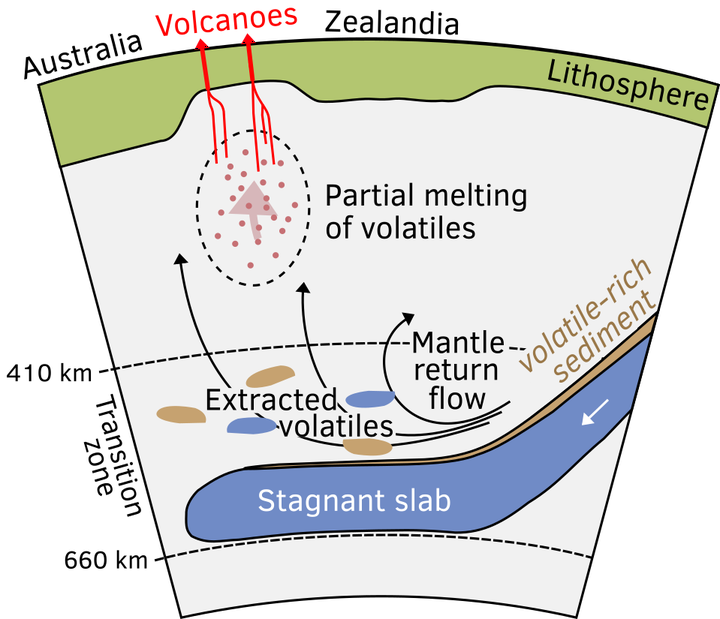 The eastern margin of Australia and Zealandia has experienced extensive mafic volcanism since Australia broke away from Antarctica approximately 80 million years ago. A plume origin has been proposed for age-progressive volcanism observed on the continent and offshore. These are, however, the exceptions - the majority of eruptions in the region exhibit no clear age progression. From our plate reconstruction of the Australia-Zealandia region over the last 80 million years that has most likely accumulated at the transition zone. Anomalous mantle has previously been identified from isotopic analysis on a limited set of samples. Our expanded dataset comparing 143Nd/144Nd and 206Pb/204Pb isotopic ratios favour a high degree of lithospheric interaction that is increasingly more pronounced at high latitudes. Compilations of P and S-wave tomography add further support for an anomalous transition zone in the region. We propose that widespread, non-age progressive volcanism results from sporadic upwellings triggered by changes in plate kinematics which entrains stagnant subducted material at the transition zone. The most pronounced pulse of volcanism occurs at 23 Ma and coincides with an abrupt increase in plate velocity and subduction flux. This provides a framework through which to explain non-age progressive volcanism in a region of anomalous mantle composition.